The year started well with an inspiring long weekend in CENTRAL AUSTRALIA mid year included my first attempt at the Archibald Prize and finished with being selected into Hidden Faces, Salon des Refuses!

Most of 2017 was around CHANGING FACE OF CARDINIA PROJECT EVENTS:

For details about the Project and Artist Statements go to:

Other Exhibitions for 2017 can be viewed here:

Showcasing the works of multi-talented Victorian Artists whose portraits were originally submitted for national portrait prizes and either not hung in ‘official’ exhibition or not shown in Melbourne.

NOTE: Despite the success of HIDDEN FACES, I was never happy with the end result of Damien’s World portrait and reworked the portrait on its return to my studio. I know this is looked upon negatively but in the end I had to feel like I’d achieved my aim. In hindsight, it should have been a new canvas.

This version of the portrait I called ‘Conversation with Professor Kingsbury’.

My reasons for reworking were that I didn’t think the original version captured the sitter’s true character. Professor Kingsbury is a great thinker and very articulate talker and I wanted to capture him doing both - a challenge for any portrait! I admire this in him, he talks about serious issues and with great passion.  I have given him a more serious look, turning the face slightly and have adjusted the background.

This wasn’t to be the final version however and the final version became  ‘A Day in the Life, Professor Damien Kingsbury’, submitted to the Archibald in 2019. Adjusting the background again the aim was to reflect his maverick attitude, his writing and interest in international affairs as well as symbolising his connection with family.

I guess a portrait can’t say everything about a complex personality.

In 2017 I visited the Van Gogh exhibition The Seasons at the National Gallery of Victoria and was inspired to use bolder colour and thicker paint application in work that immediately followed. Van Gogh has always been a favourite artist to look at for use of colour, his impulsiveness and vitality. The first work was a painting of some Dahlias given to me by a friend with colour so vibrant I couldn’t resist painting. The second is a first attempt practice work for an intended series based on Central Australia inspired by a visit there in February 2017. The third was a 6oth birthday gift painted for a friend, of him on his beloved motorbike. I include the reworking of Blue Girl to Melancholy Beach 1 because the vibrant thicker application of paint was definitely inspired by Van Gogh. His legacy lives on! 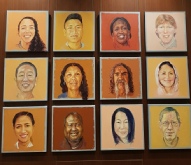